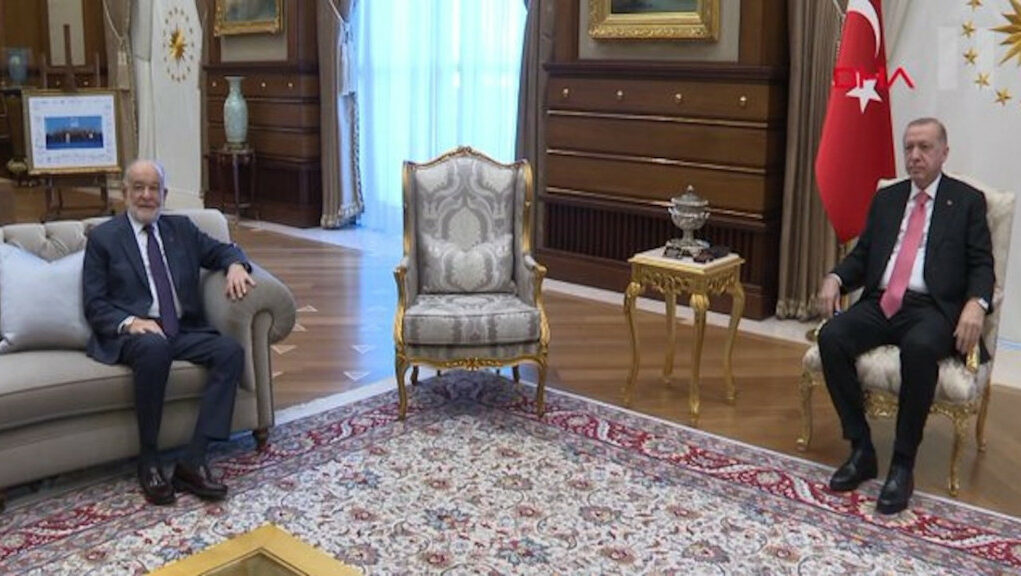 An unusual seating arrangement at President Recep Tayyip Erdoğan’s recent meeting with Temel Karamollaoğlu, leader of the Islamist opposition Felicity Party (SP), at the presidential complex has raised questions regarding the policy adopted by the president in relations with the SP.

The Wednesday meeting, which was closed to the press and lasted for nearly two-and-a-half hours, was said by many to have taken place as part of Erdoğan’s efforts to form new alliances ahead of the 2023 elections because his Justice and Development Party (AKP)’s nationwide support has dropped more than 10 percent since the last general election held in 2018, according to recent surveys.

Photos of the meeting, released by the presidency, showed Karamollaoğlu sitting on a sofa far from the president, while there was an empty chair similar to one that Erdoğan was sitting in and was closer to the president.

The photos led to discussions on social media, with many users claiming that the seating arrangement was a planned insult by Erdoğan. The incident, referred to by some as the “sofa crisis,” also raised questions regarding Erdoğan’s motives, since he wasn’t expected to denigrate a party leader with whom he plans to form an alliance.

SP vice chair Bülent Kaya was quoted as saying by local media outlets, after the meeting, that Erdoğan had implemented his own “seating protocol” as the host.

“But I don’t know if this protocol is also being applied to other party leaders. I leave the images up to the discretion of the public,” he added.

Journalist Adem Yavuz Arslan on Wednesday said during a program broadcast on YouTube that Erdoğan’s move to seat Karamollaoğlu on a distant sofa instead of the closer chair wasn’t a mistake but a manifestation of his feelings of anger towards the SP that he failed to hide and which stemmed from the fact that the SP didn’t “owe loyalty” to Erdoğan despite being an Islamist party like his.

Following his meeting with Erdoğan, Karamollaoğlu held a press conference at party headquarters, saying that they had discussed many issues concerning Turkey as well as the world, without disclosing what these were.

“We have the same ideas on certain points and different ideas on others, but it was a very friendly, good meeting,” he added.

According to the Turkish media, the COVID-19 pandemic was cited as the reason officials are being seated away from Erdoğan, but the SP officials argued that if this had been the case, then an empty chair shouldn’t have been placed next to Erdoğan’s seat.