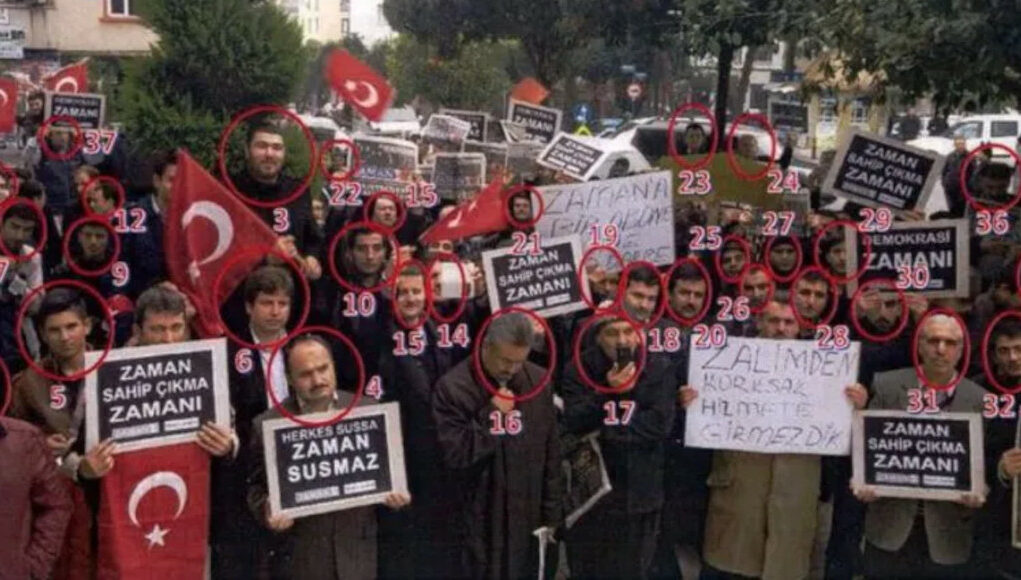 According to an 11-page document dated September 15, 2020, a police department in Turkey’s western province of Aydın used facial recognition software to identify people who had protested a raid on a newspaper in İstanbul that was critical of the government. It was noted in the document that facial recognition software had recently been put into use and helped police identify the people who took part in the demonstration against the crackdown on freedom of the press.

A separate communiqué signed by police chief Mehmet Yıldırım revealed that photographs obtained from a man named Zeki Ak showed people protesting in a public space against the police raid on Zaman, at one time Turkey’s most highly circulated mainstream newspaper before a government takeover in March 2016.

Yıldırım informed the Aydın Chief Public Prosecutor’s Office that identification of the people who participated in the rally was complete and sent the 11-page report to initiate a criminal investigation into the people.

A communiqué from a police chief to a prosecutor’s office revealed the use of facial recognition software to hunt down critics and pursue criminal charges on bogus evidence:

In the first two photos, some 50 people are seen holding a protest in front of a courthouse located on Government Boulevard, the main street of Aydın. Many were holding placards that carried a message of solidarity with the newspaper, which had come under government pressure.

Violations of freedom of the press and expression gained momentum in Turkey following the Dec. 17 and 25, 2013 investigations, which exposed the country’s most serious corruption scheme to date that included Erdoğan and senior government officials. The government shut down Twitter and YouTube in the wake of the investigations, which were glossed over, with government interference in the police force and the judiciary.

Zaman covered the graft case and exposed how Erdoğan set up a sophisticated corruption scheme that involved Iranian gold trader Reza Zarrab and Saudi financier Yasin al-Qadi, at one time listed under sanctions by both the UN and US.

Erdoğan launched a crackdown on Zaman, orchestrating a police raid that detained Ekrem Dumanlı, the editor-in-chief of the daily, at the paper’s headquarters in İstanbul in December 2014. The detention prompted protests nationwide and condemnation from international press advocacy groups, while the European Union and the United States expressed concern over the crackdown.

Six years later, 43 people who participated in the rally to protest the detention of Dumanlı in front of the courthouse in Aydın were identified using facial recognition software and faced criminal charges filed by Turkish authorities. Police also identified 10 women who attended the rally.

Confidential police report that shows how facial recognition software was used to go after protestors who demonstrated against the government’s move to detain the editor-in-chief of the Zaman newspaper:

Zaman, which used to sell 1.2 million copies a day at its peak, was seized by the government in March 2016 to silence the mainstream paper and was shut down altogether four months later.

The same technology was also used in identifying about a dozen union members who protested the government’s abrupt decision to shut down private prep schools that offered college and university prep courses and that employed tens of thousands in Turkey. The police case file included four photographs that showed about a dozen people protesting the government’s move in front of a courthouse. Police identified 12 people from the photos using the software.

Prep schools, especially those that were run by the Gülen movement, a group that is critical of the Erdoğan government’s policies, became a target. In an unprecedented move in 2013 the government pushed a bill through parliament banning all the private prep schools that had been operating in Turkey for decades. The move was criticized by the main opposition Republican People’s Party (CHP), which considered the legislation an attack on free enterprise.

Some pointed out that it would be low and middle-income families that would be most negatively affected by the law, as prep schools provide an opportunity to level the playing field for their children in centralized exams. Others noted that the success of Turkish students in both local and international tests such as the Program for International Student Assessment (PISA) would drastically decrease if prep schools were abolished since the education provided in public schools was inadequate.

The government move adversely impacted some 2,107,000 students who were attending 3,640 private prep centers operating at the time in provinces across Turkey.

The people who protested the government move were prosecuted nationwide including individuals identified by the police in Aydın by using the facial recognition software.

The Turkish government’s use of sophisticated spyware and surveillance technology has reached a disturbing level in recent years, with tens of thousands of people prosecuted, detained and sent to jail for simply having downloaded and used the ByLock encrypted messaging app, which was available for download at the Android and iOs platform app stores and had been installed on hundreds of thousands of mobile devices around the world.

Nordic Monitor published a report which revealed that the use of Signal, a popular encrypted messaging app, appears to have been criminalized in Turkey. Confidential documents listed Signal as one of the indicators that a suspected person can be charged with a crime under the country’s most abusive anti-terror laws if the app was found to have been installed on his or her smartphone.

During interrogations the Turkish police often asked detainees if they used other popular social networking and communications platforms such as Facebook, Skype, Tango, WhatsApp, Coco, Kakao, Falco, Coverme or TikTok.

The Erdoğan government has aggressively tried to procure surveillance technology from abroad in order to track the movements of critics. Forbes published an exclusive story in October 2016 that reported how Swedish engineers rebelled against the California-based Procera Networks, which landed a $6 million contract with a Turkish government-controlled telecom firm. The contract included surveillance of subscribers’ usernames and passwords for unencrypted websites, their IP addresses, what sites they’d visited and when.

Swedish engineers who worked in Malmö, a city in the south of Sweden, had grown concerned that they were being asked to turn innocent tech into an evil surveillance tool and hand it to a regime that had become increasingly repressive.

The UK is among the top providers of surveillance technology to Turkey despite widespread violations of human rights by the Erdoğan government, which stifles dissent, suppresses critical voices and is currently incarcerating close to 200 journalists. Vice news reported in July 2017 that the UK exported surveillance technology to Turkey that may have directly aided the Turkish government in punishing opponents, critics and and journalists.

The Gülen movement, a faith based group inspired by Muslim cleric Fethullah Gülen, who has been critical of President Erdoğan on a range of issues including his increasing authoritarianism, his aiding and abetting of jihadists in the Syrian civil war and his corrupt politics, has been the most repressed and persecuted group in Turkey in recent years.

Erdoğan’s government branded Gülen as a terrorist in 2014, immediately after the corruption investigations that were made public in December 2013 and that incriminated Erdoğan, his family members and political and business associates. He accused Gülen of instigating the corruption probes, a claim that was denied by Gülen.

Criminalizing communication and social networking tools and citing their use as terrorist activity, Turkey’s public prosecutors have investigated more than 500,000 dissidents and put more than 90,000 of them behind bars without taking pains to show how they could be equated with criminal acts and without further substantiating their claims. Although participating in press meetings to protest a controversial government practice and communicating over online platforms are legitimate exercises of freedom of assembly and speech, the Erdoğan government has a different view of such rights and freedoms.

This circumstance has been highlighted by the UN Working Group on Arbitrary Detention, which ruled on September 18, 2019, in a complaint lodged by two judges arrested on terrorism-related charges solely due to their use of ByLock, that their deprivation of liberty was arbitrary. According to the working group “use [of] the ByLock application … would have been merely an exercise of their freedom of expression.”

In July 2021 the European Court of Human Rights (ECtHR) ruled that use of the ByLock application is not an offense in itself and does not constitute sufficient evidence for arrest. Turkey has refused to give effect to either the UN or the ECtHR decision.