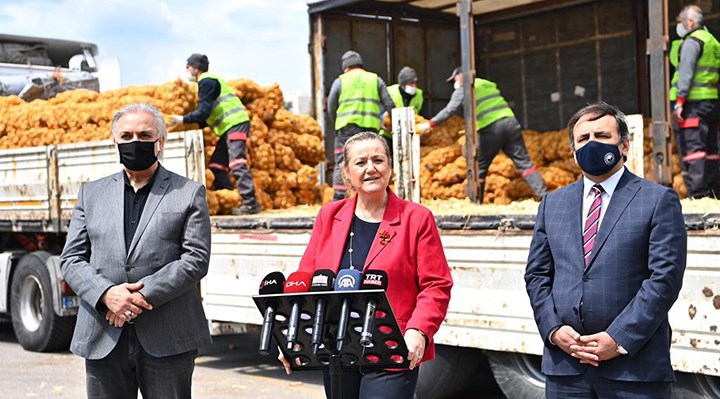 Amid skyrocketing food prices in Turkey that deprive many households of the ability to meet even their most basic needs, an aid campaign has been launched by Turkish President Recep Tayyip Erdoğan, as a part of which financially challenged families will receive potatoes and onions. The campaign also claims to help the country’s farmers, whose numbers have been declining under the policies of Erdoğan’s government.

As part of the campaign, a deputy governor in İstanbul on Tuesday hosted a ceremony welcoming the trucks carrying sacks of potatoes and onions to be delivered to needy families as part of the presidential drive, leading to comments about the Turkish government’s indifference to the financial burden on some households and farmers in the country.

The Turkish Grain Board (TMO) purchased unsold potatoes and onions from farmers upon an order from President Erdoğan, after which the sacks of produce began to be sent to Turkey’s 81 provinces to be delivered to families in need.

İstanbul Deputy Governor Özlem Bozkurt Gevrek welcomed the trucks with a ceremony in İstanbul on Tuesday. She said in a statement to reporters that the campaign was organized upon Erdoğan’s order to help farmers as well as families in need. She said 164,000 families in İstanbul, determined by the Ministry of Family, Labor and Social Services, will receive the aid packages, which include 10 kilograms of onions and 20 kilograms of potatoes.

Turkey's economy is the worst it's seen in perhaps two decades. As a result this Ramadan the gov is handing out free bags of onions and potatoes to 164,000 families in Istanbul (and more throughout country). The mismanagement of economy has led to sharp price rises and inflation. https://t.co/DpWkZrTbWT

The deputy governor also said the distribution of the produce shows that the Turkish state is always behind its farmers and its people who are financially challenged.

However, the Turkish government receives widespread criticism for dealing a heavy blow to Turkey’s agriculture and farmers with its policies that deprive farmers of state support and leave them alone with skyrocketing costs, and for destroying the country’s agricultural land.

According to the state statistics agency, TurkStat, over the last decade the number of farmers in Turkey has plummeted by almost half, from 1.1 million in 2010 to 568,000 in 2020, while the country’s agricultural land decreased by more than 18 percent between 2002 and 2020.

The aid drive comes at a time when Turkey’s annual inflation climbed above 16 percent in March for the first time since mid-2019 and food prices are rapidly rising, with some retailers resorting to measures such as protecting baby formula behind lock and key because people can’t afford to pay for it.

Last year, the price of potatoes and onions made it into public debate during which the regular police conducted raids on warehouses. After the establishment of the Unfair Price Assessment Board in April 2020, it started to carry out the raids itself. The boardis also authorized to inspect and impose sanctions on online vendors.

While the government maintains that the prices could be reined in through sanctions, producers believe that the inflationary trend is caused by the government’s import-based policies and its declining support for domestic farmers. Turkey’s food exports correspond to 57.8 percent of its food imports, which means that the country is overall an importer of food.