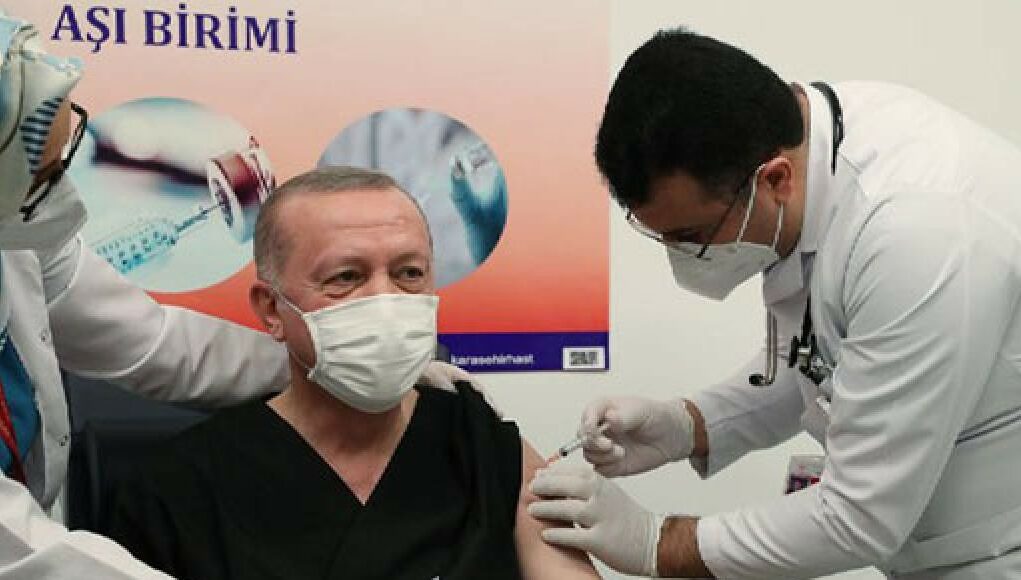 Turkish President and ruling Justice and Development Party (AKP) leader Recep Tayyip Erdoğan and top officials from his party were among the first group of people to receive coronavirus vaccinations on Thursday although they are not on a priority list for the vaccine, leading to widespread criticism.

Turkey began to vaccinate its healthcare providers on Thursday after the Turkish Pharmaceuticals and Medical Devices Agency issued an emergency use authorization for the CoronaVAC, developed by China’s Sinovac, on Wednesday.

Health Minister Fahrettin Koca was the first to receive the vaccine on Wednesday evening after the green light was given for its use. Koca’s vaccination was aired live on TV in an attempt to eliminate concerns about the safety of the vaccine or vaccinations in general.

On Thursday evening Erdoğan appeared before TV cameras at the Ankara City Hospital to get a coronavirus shot. Erdoğan said members of his party’s Central Decision and Management Board (MKYK) were also being vaccinated. There are 51 people in the party’s MKYK, but only four of them are in risk groups announced on the Health Ministry’s coronavirus vaccine priority list. One MKYK member who got the shot is only 23 years old.

Turkey does not currently have sufficient doses of the vaccine as only the first batch of CoronaVAC, 3 million doses, arrived in Turkey on Dec. 30 after a two-week delay. These vaccines will be sufficient for only 1.5 million people since one person requires two doses to develop immunity against COVID-19.

According to the priority list announced by the ministry on Thursday these vaccines will be administered to healthcare professionals and pharmacy staff first and then to the elderly and disabled as well as nursing home personnel.

Erdoğan, who is 66 years old, is in the fifth group among people over the age of 65 who will get the vaccine according to the priority list.

The newly established Democracy and Progress Party’s (DEVA) deputy chairman Mustafa Yeneroğlu was one of those who criticized Erdoğan and his AKP for getting coronavirus  vaccinations before the people who are on the priority list.

“Did your turn come, Mr. Erdoğan? In which risk group are you and your group? Or do the rules not apply to you? A president should set an example for his people. They should obey the rules first. But we were not surprised, unfortunately,” tweeted Yeneroğlu.

Barış Atay, a deputy from the Workers’ Party of Turkey (TİP), asked Health Minister Koca according to which priority list Erdoğan and his party members were vaccinated.

“Erdoğan is in the fifth priority group [among elderly people]. He is 66 and as far as we know does not have a chronic disease. We don’t know how the MKYK members could be vaccinated at all,” said Atay.

Comparisons were also drawn between other leaders such as German Chancellor Angela Merkel, Russian President Vladimir Putin and British Prime Minister Boris Johnson who have not yet received the vaccine and are waiting their turn.

Putin recently called on Russians to get vaccinated and said: “Our health care professionals say the vaccines … are meant for people of certain ages … people like me are not yet allowed to get vaccinated. I’m a law-abiding citizen and I always listen to what our health care professionals say, therefore I haven’t been inoculated yet, but I will surely do that as soon as permissible.”

Similarly, Merkel said in her New Year’s speech that she would be vaccinated “when my turn comes.”

In the meantime, Nationalist Movement Party (MHP) leader Devlet Bahçeli, an ally of Erdoğan, and İYİ Party leader Meral Akşener announced on Friday that they have been vaccinated in line with a call from Health Minister Koca; however, main opposition Republican People’s Party (CHP) leader Kemal Kılıçdaroğlu and pro-Kurdish Peoples’ Democracy Party (HDP) co-chairpersons Pervin Buldan and Mithat Sancar announced that they will wait their turn, saying that healthcare professionals and high-risk groups should be vaccinated first.

Turkey has so far vaccinated more than 250,000 health workers.