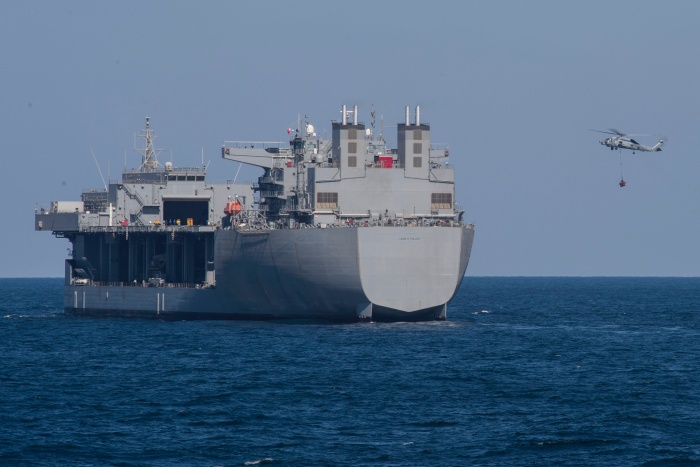 The massive American warship, the USS Hershel Woody Williams, has arrived in the Greek island of Crete, on a mission to keep an eye on escalating tensions between NATO allies Greece and Turkey over energy rights in the eastern Mediterranean, according to the Voice of America.

The US vessel joins others from the European Union and Russia, raising concerns among some in Greece about what a military buildup could mean.

Military experts describe the USS Hershel Woody Williams as a floating base, the second of a new class of massive ships the US Navy is now using as fast transport and support centers for military operations.

Greek and Turkish battleships have been gathering in the region since President Recep Tayyip Erdoğan ordered a research vessel to the eastern Mediterranean to survey for gas and oil.

Greece says the seabed off the coast of Crete and other islands in the region are its own to exploit – a claim Turkey has repeatedly refused, saying islands are not entitled to what is known as an exclusive economic zone.

US officials have not given details on the orders the Hershel Woody Williams received or how long it will remain in Crete’s Souda Bay.

But its presence comes as France last week also deployed a pair of frigates to the eastern Mediterranean – a move that quickly drew Moscow’s attention.  The Russian navy moved in one of its frigates.

Currently chairing the EU’s rotating presidency, German Chancellor Angela Merkel has been trying to convince Athens and Ankara to enter into negotiations over the conflicting claims each side has to air and sea rights in the region.

Germany has been reluctant to support stiff sanctions against Turkey, but it has advised the government in Ankara to pull back its survey vessel from the disputed waters.