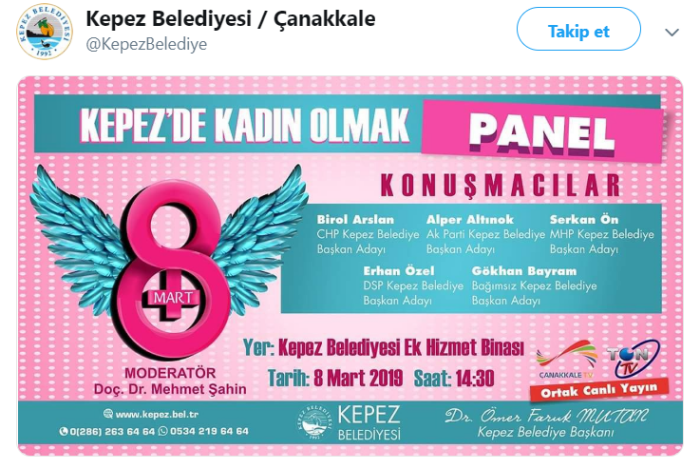 The Kepez Municipality in the western Turkish province of Çanakkale has organized a panel discussion on the occasion of International Women’s Day on March 8, but all the speakers as well as its moderator are men, the t24 news website reported on Thursday.

The title of the panel discussion is “Being a Woman in Kepez.” The speakers are mayoral candidates from four political parties: the Justice and Development Party’s (AKP) Alper Altınok, the Republican People’s Party’s (CHP) Birol Arslan, the Nationalist Movement Party’s (MHP) Serkan Ön and the Democratic Left Party’s (DSP) Erhan Özel as well as Gökhan Bayram, an independent mayoral candidate for Kepez, in local elections to be held on March 31.

The opening speech of the panel discussion will be made by current Kepez Mayor Ömer Faruk Mutan, who is from the AKP, while the moderator of the panel is Associate Professor Mehmet Şahin.

The Kadın Kolektifi, or Women’s Collective, a women’s rights group, criticized the Kepez Municipality in a message from its Twitter account on Tuesday.

“Guess what is missing in the panel discussion organized by Çanakkale’s Kepez Municipality,” the group asked, posting a photo of an invitation to the event.