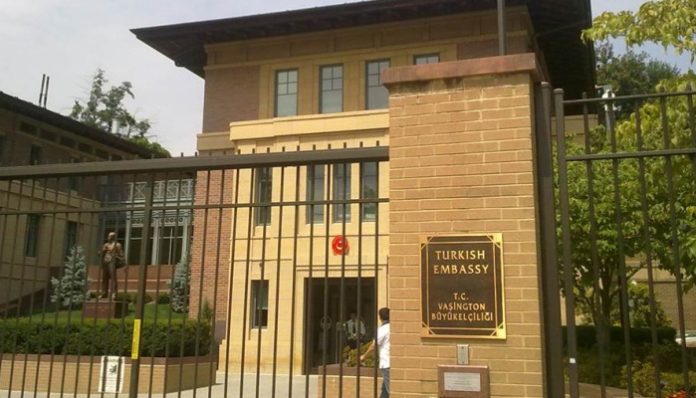 Two diplomats and an administrative officer in the Turkish Embassy in Washington, D.C., are under investigation in Turkey over “suspected links” to the Gülen movement, the Hürriyet Daily News reported on Wednesday.

Diplomats Cem Ulusoy, the embassy’s counsellor, Celil Erdoğan, the press attaché and spokesperson, and Erdoğan’s wife Mehtap Erdoğan, an administrative officer, were summoned to Ankara due to an ongoing investigation.

Sources in the embassy confirmed the summoning of the three with an administrative decree but did not provide any details about the reason. It’s not clear whether the case is peculiar to the Washington embassy or if there is a wider operation against remaining Gülen sympathizers in other Foreign Ministry missions.

Reports that three embassy personnel were summoned due to an ongoing investigation were already echoing in the corridors of Washington last month. Spokesperson Erdoğan’s absence during Turkish Foreign Minister Mevlüt Çavuşoğlu’s visit to Washington last month did not go unnoticed.

Erdoğan worked with Ömer Çelik during his term as European Union Affairs minister. Ulusoy was the consul general in Burgas, Bulgaria, between 2011 and 2013.

“It is true that the aforementioned persons were summoned with an administrative decree before they completed their postings,” sources in the Turkish Embassy said but refused to comment on reports that they were under investigation for alleged links to the Gülen movement.

The embassy is said to have informed the US Department of State about the termination of the three officials’ assignments.

One of the diplomats summoned, former spokesperson Celil Erdoğan, told the Hürriyet daily that he is still in the US.

“Under normal conditions, I was supposed to return to Turkey in September, but they had already summoned me. We were not informed of the reason. We are going through a strange and tough period. Let’s hope for the best,” he said.

Following a coup attempt on July 15, 2016 that left 249 people dead and more than a thousand injured, the ruling Justice and Development Party (AKP) along with Turkish President Recep Tayyip Erdoğan immediately blamed the coup on the Gülen movement.

Islamic cleric Fethullah Gülen, who inspired the movement, strongly denied having any role in the failed coup and called for an international investigation into it, but President Erdoğan – who called the coup attempt “a gift from God” – and the government initiated a widespread purge aimed at cleansing sympathizers of the movement from within state institutions, dehumanizing its popular figures and putting them in custody.

Amid an ongoing witch-hunt targeting the Gülen movement, more than 50,000 people have been jailed while more than 150,000 have been removed from state posts due to alleged Gülen links since the coup attempt.