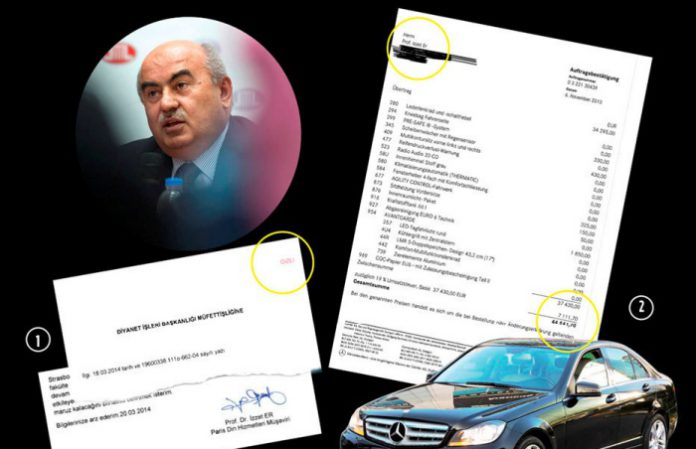 French weekly magazine Le Point has discovered through documents it obtained that there is extensive corruption in the French branch of the Turkish-Islamic Union for Religious Affairs (DİTİB) and that the organization is busy not only with religious matters but also with spying on opponents of the Turkish government.

In a report titled “The tricks played by Erdoğan’s imams,” in reference to Turkish President Recep Tayyip Erdoğan, Le Point examined hundreds of pages of diplomatic correspondence of DİTİB officials in France as well as those from the Turkish Religious Affairs Attaché’s Office in Paris and revealed how they collect huge amounts of money from Turks in France and illegally use a significant part of it for their own purposes.

DİTİB runs 264 mosques across France and is responsible for 202 imams sent from Ankara to this country.

Le Point said it had worked for weeks with academics and journalists from many corners of Europe who know Turkish to confirm the authenticity of the documents it obtained, to translate them and to analyze the religious system in effect, which it said is far from Islamic principles.

“These documents also confirm a widely held opinion. Just as is the case in the rest of Europe, France is also part of the big worksite in which Erdoğan is working to get control of the Turkish diaspora,” wrote the magazine.

According to data obtained by Le Point, the amount of money collected from Turks in France who wanted to perform hajj was 3,628,400 euros in 2012. The Paris Religious Affairs Attaché’s Office made a financial gain of 505,434 euros from this money, while 1,940,220 euros of it was sent to the Religious Affairs Directorate (Diyanet) in Ankara.

From the sale of a calendar produced by Diyanet, 53,490 euros were collected from Turks in France in 2013.

The Paris DİTİB also runs a funeral services fund in the French cities of Lyon and Strasbourg. Turks in France pay monthly fees into this fund so that their bodies can be transported to Turkey for burial when they die in France.

A person who knows Turkey’s Diyanet well and requested anonymity told the magazine: “DİTİB transports the bodies of not more than 150 people to Turkey in a year, and the transportation of the body and burial cost around 3,500 euros. You can calculate the rest.”

The magazine says DİTİB has not announced its yearly balance sheet since its establishment.

DİTİB’s chairman in France is paid well and has a diplomatic passport. An apartment was bought in the posh Paris neighborhood of Neuilly from DİTİB’s budget for the religious affairs attaché, who has offices both in the Turkish consulate building in Boulogne and DİTİB headquarters in Bagnolet. The attaché has also an office at the Turkish Embassy in Passy, where he drops by now and then.

In letters sent by former religious affairs attaché Gençağa Sayan to Ankara, the attaché confesses that there are irregularities in DİTİB’s financial activities.

In one letter, he says he suspects that a building owned by Diyanet was rented by a sympathizer of the outlawed Kurdistan Workers’ Party (PKK), but he avoids taking legal action against the renter on the grounds that such an action could lead to financial supervision of DİTİB’s financial activities and reveal its irregularities.

In his letters, Sayan also notifies Ankara about opponents of the Erdoğan regime in France who he describes as being followers of the “parallel structure,” a phrase coined by the Turkish government to refer to the faith-based Gülen movement.

The Turkish government launched a war against the Gülen movement, which conducts educational activities as well as charity work around the world, in the aftermath of corruption investigations in late 2013 that implicated Erdoğan’s close circle. The war against the movement culminated in the aftermath of a failed coup attempt in Turkey in July 2016 because Erdoğan accused the movement of masterminding the abortive putsch.

The Gülen movement rejects any involvement in the corruption investigations and the failed putsch.

A Turkish imam who was living in eastern France, identified only by his initials as M.O., is among the victims of the spying of DİTİB on Erdoğan opponents in France.

When M.O. went to Turkey to take part in an internship program in July 2016, a distant acquaintance informed the police that he was a follower of the Gülen movement. A travel ban was imposed on the imam to prevent him from returning to France, and he was arrested in February 2017.

The imam was handed down a jail sentence of six years, three months following a trial at a court in the Black Sea province of Samsun. He was released on judicial probation after spending some time in jail and had to cross the Turkish border illegally on foot in order to reunite with his family in France.

Speaking to Le Point, M.O. said the evidence and testimony of informants that led to his arrest was collected by Fevzi Hamurcu, the religious affairs attaché in Strasbourg who later assumed the post of DİTİB chairman in France.

Among the informants who testified against M.O. was Mustafa C., a member of the pro-Erdoğan Union of European Turkish Democrats (UETD).

In his testimony Mustafa C. said he did not know M.O. personally but knew his neighbors and some people who were acquainted with him.

“Mustafa C., who served a six-year jail sentence in Strasbourg beginning in 1999 on charges of forcing women into prostitution through the use of force and violence and woman trafficking, caused this imam [M.O.] get a jail sentence on the grounds that he was a follower of the Gülen movement,” Le Point wrote.

M.O. told the magazine he took legal action against the informants in France on accusations of slander. “I lost my job after this incident. I leave my house as little as possible. My children don’t even dare play in front of our house,” he said.

The imam who loves Mercedes automobiles

Turkish academic İzzet Er, who was appointed as the religious affairs attaché in Paris in 2011, had a Mercedes Benz C180 bought for him from the DİTİB budget on Nov. 8, 2013 at a cost of 44,541 euros, according to the French magazine.

The Mercedes was bought with money collected from Turks who wanted to perform the hajj ritual.

Er became the DİTİB head in Germany in 2012. DİTİB operates 800 mosques in Germany.