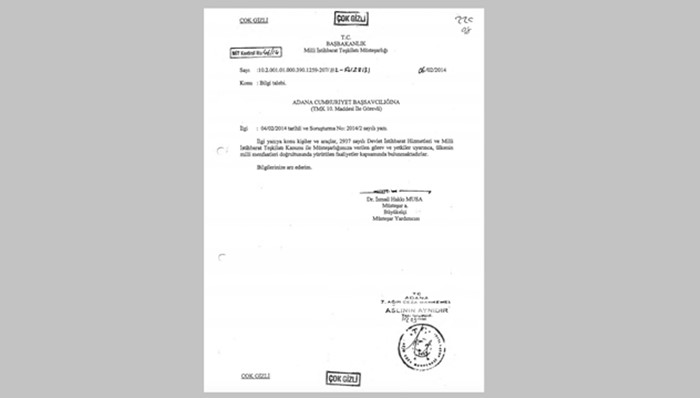 Confidential documents that were included in the case file of a criminal investigation reveal how Turkey’s National Intelligence Organization (MIT) rented busses to transfer jihadist fighters from Turkey’s refugee camps to Syria on Jan. 10, 2014.

The next day, Jan. 10, acting on an anonymous tip, Turkish narcotics police executed search warrants for two busses that were parked in a rest area in the area if Incirlik along a highway in Adana province and found 40 boxes of ammunition for PKM machine guns in the cargo hold of the busses. The drivers, Şahin Güvenmez (37) and Esat Lütfi Er (48), were detained along with the owner of the coach firm, Mihraç Sarı (42), as part of investigation case file No.2014/53. In their statements the firm owner and drivers testified that the busses were leased by MIT.

Public prosecutor Mustafa Sırlı ran the probe and ordered a field examination of the place where the jihadists were picked up and where they were dropped off. Videotaped statements by all three suspects were included in the case file. In his statement Sarı said a government employee named Erdem (most likely the name used by a MIT agent) called him on Jan. 9, 2014 at 17:00 hours and asked him to transport refugees from Reyhanli to Akçakale. He then called the drivers and arranged the transfer. Driver Er also confirmed what his boss said in separate testimony, saying that after his boss’s directions, a MIT intelligence officer named Salim called him and told him to go to Reyhanli. The other driver also gave a similar statement.

With the hard evidence of the seized ammunition and suspects’ statements, the case confirmed the long-suspected trafficking of jihadists by Turkish intelligence agency MIT to Syria to aid and abet radical armed groups fighting the Bashar al-Assad regime. With the embarrassing revelations, the Erdogan government panicked and immediately replaced public prosecutor Sari with a loyalist Cumali Tülü. The new prosecutor hushed up the case and dropped the probe despite incriminating evidence in the case file against the Turkish intelligence service. In decision No.2014/28, Tülü dropped the investigation on the grounds that there was no reason to pursue it further. He stated that Law on Intelligence No.2937 requires all state institutions to help MIT fulfill its duties.

The problem, however, is that no law in Turkey authorized MIT to arm and assist foreign fighter groups in Turkey or abroad. The transfer of arms and armed personnel within Turkey are strictly controlled and must be done according to established rules and procedures. That is why Erdogan immediately rushed an amendment to the Law on Intelligence in Parliament to strengthen MIT with new powers after the fact. After the political pressure and hastened legislative changes, the intelligence agents who escorted the busses and coordinated the transfer of armed jihadist groups escaped criminal liability.

As if the hush-up of this criminal case was not enough, the Erdogan government went after prosecutors and police chiefs who had investigated the incident. There was a fresh investigation launched to find out who the whistleblower was that tipped the police off in Adana. On Feb. 4, 2014, another public prosecutor, Ali Dogan wrote to MIT, asking the intelligence agency to identify the deep throat who spilled the beans on the Jan.10 bus incident. The probe to identify the whistleblower had case file No.2014/117. In a response to the letter MIT said it had investigated but could not identify the person who had tipped off the police about the busses.

But the paper trail is still there, and all the documents have become part of the official record in judicial investigations that may one day lead to a reopening of the cases and put the Erdogan government in a difficult position in international legal challenges that may come once Syria  becomes stabilized. That is the reason why Erdogan is terrified and keeping the investigators who uncovered this traffic behind bars, hoping that the issue will fade away. Since the critical media in Turkey was decimated, most media outlets would not dare publish these revelations.

Nine days after the bus incident, Turkish investigators intercepted trucks that were carrying heavy arms to jihadist groups in Syria, again under the protection of MIT in defiance of Turkish laws at the time and in clear violation of international agreements. The interception on the Adana-Ceyhan highway exposed still shots and video recordings of heavy arms in the containers hauled on flatbeds to Syria. Perhaps we will see more evidence coming out in the future incriminating Erdogan and his Islamist thugs in fueling the dirty war in Syria. There has to be accountability for that in order to provide some sort of closure on the terrible chapter in the Syrian file.