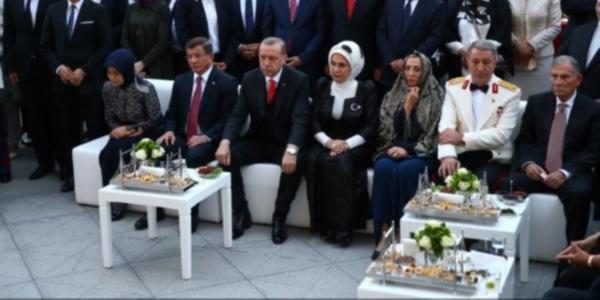 Chief of General Staff Gen. Hulusi Akar’s wife, Şule Akar, put on a headscarf on Wednesday as the Quran was being read at an official reception held to mark Victory Day, the first wife of a chief of general staff to be seen wearing one at such an event.

During the official reception at the presidential palace, marking the 95th anniversary of the Aug. 30, 1922 victory of Mustafa Kemal Atatürk over the Greek military, Gen. Akar’s wife Şule Akar put on a headscarf while Quran and prayers were being read.

For the first time in Turkey, the wife of a the country’s top general was seen with a headscarf at a reception.

Turkey’s General Staff sent a letter in February to the force commands in which it removed a ban on Islamic headscarves among Turkish Armed Forces (TSK) personnel and military cadets.

The General Staff told the force commands that female officers and noncommissioned officers  would now be allowed to wear headscarves.

The government amended the sixth article of a regulation in the civil servant dress code which went into effect in 1982 to abolish the headscarf and beard bans among TSK civil servants.

In August the Turkish government also abolished a ban that prohibited female police officers from wearing a religious headscarf while on duty.