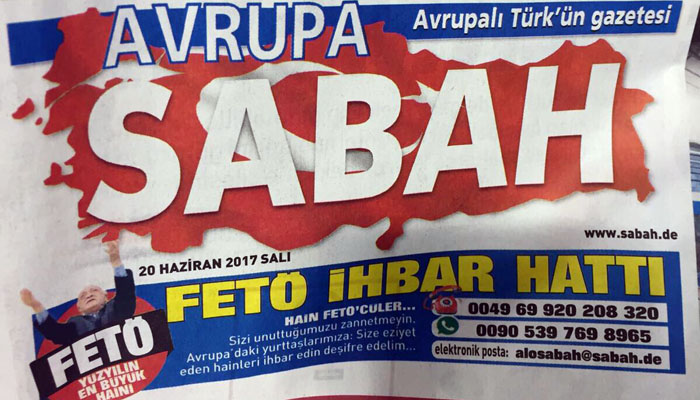 The pro-government Sabah daily’s Europe edition, Sabah Avrupa, has set up a telephone line for its readers to report followers of the faith-based Gülen movement, against which Turkish authorities launched a witch hunt over its alleged involvement in a failed coup last summer.

On its front page on Tuesday, Sabah Avrupa published a telephone number for its readers to call to report Gülen followers and said: “FETO report line. Traitor FETÖ members. Don’t think we have forgotten you! To our readers in Europe: Report those traitors [Gülen followers] who tyrannized you and we will uncover them.”

FETÖ is a derogatory term used by government circles to refer to the Gülen movement.

Earlier In February, German police teams raided the apartments of four Turkish-Islamic Union for Religious Affairs (DİTİB) imams in North Rhine-Westphalia and Rhineland-Palatinate who were suspected of acting as informants. The coordinator of DİTİB, mainly supported by the Turkish Religious Affairs Directorate (Diyanet), Murat Kayman, announced his resignation over the allegations.

In December 2016, Belgian Justice Minister Koen Geens announced that he had ordered security and intelligence units in the country to closely monitor mosques operated by the Diyanet amid reports that the directorate had asked imams to spy and inform on Belgians of Turkish origin suspected of being active in the faith-based Gülen movement.

Despite repeated statements by US-based Turkish Islamic scholar Fethullah Gülen, whose views inspired the movement, and Gülen-linked institutions abroad denying involvement in the failed coup, followers of the movement have been subjected to harassment, discrimination and even assault by pro-government people.

Several Gülen sympathizers working in Gülen-linked institutions were handed over to Turkish authorities after being detained by local police in several countries as part of the Turkish government’s witch-hunt against the Gülen movement overseas.