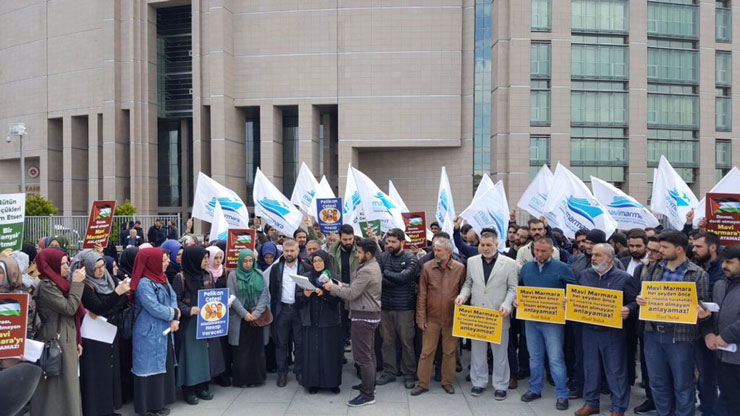 The Foundation for Human Rights and Freedoms and Humanitarian Relief (İHH), which organized the Mavi Marmara flotilla to Gaza in 2010, has filed a criminal complaint against Cem Küçük, a staunchly pro-government journalist, due to Küçük’s controversial remarks about the passengers of the Mavi Marmara.

The flotilla was attacked in international waters on May 31, 2010, and nine Turkish citizens and an American citizen of Turkish descent were killed in the raid. The Mavi Marmara incident sparked a diplomatic crisis with Israel as then-Prime Minister Recep Tayyip Erdoğan used the issue extensively as a political tool in domestic rallies.

Küçük attracted widespread criticism due to his remarks about the passengers of the Mavi Marmara during a TV program on Wednesday.

Küçük said when President Erdoğan takes over the leadership of the Justice and Development Party (AKP) again, he should “part ways with radical Islamists and the maniac characters on the Mavi Marmara.”

“They are automatically enemies of Israel, the West and everything. There are strange characters. Relations should be cut off with them. I think Mr. Erdoğan will do this. We need to deal with them and put our relations back on track with the US,” Küçük said.

The criminal complaint against Küçük was filed at the İstanbul Courthouse on Friday by IHH members as well as relatives of the Mavi Marmara victims, who accuse Küçük of inciting hatred and enmity among the people and insulting the Mavi Marmara passengers.

IHH executive board member and lawyer Gülden Sönmez told reporters in front of the courthouse that more than 50 people across the country, who are either Mavi Marmara passengers or sympathizers, have filed criminal complaints against Küçük.

Küçük is notorious for his attacks on government critics on social media.

Following the Mavi Marmara incident, Turkey demanded an official apology from Israel, compensation for the families of those killed and the lifting of Israel’s Gaza blockade.

Turkey and Israel normalized relations last August after the Turkish Parliament approved a deal in June for Israel to pay $20 million in compensation to victims on board the Mavi Marmara.