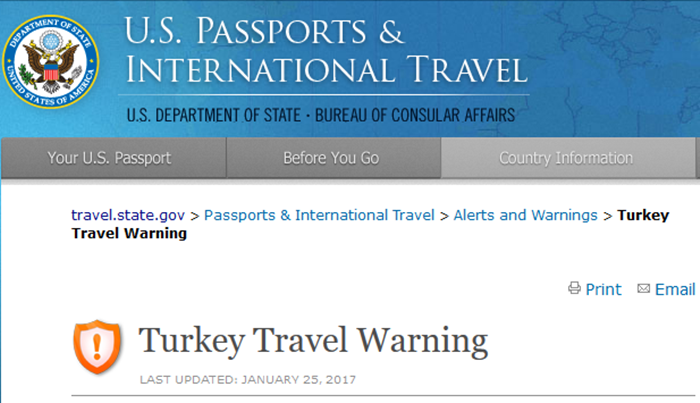 The US Department of State on Wednesday updated a travel warning for US citizens in or traveling to Turkey due to increased threats from terrorist groups in the country.

The statement, which followed similar ones in recent months, urged US citizens to avoid travelling to southeast Turkey and to carefully consider the risks of travel to and throughout the country.

“Avoid travel to southeastern Turkey, in particular large, urban centers near the Turkish/Syrian border. Stay away from large crowds, including at popular tourist destinations. Stay away from political gatherings and rallies,” read the statement posted on the Department of State website.

“The Department of State has placed restrictions on official travel by U.S. government personnel to Istanbul and to certain areas in southeast Turkey” the warning further stated.

Recalling numerous terrorist attacks in 2016 and early 2017 in Turkey, the State Department underlined rising anti-American rhetoric, saying: “In addition, an increase in anti-American rhetoric has the potential to inspire independent actors to carry out acts of violence against U.S. citizens.”

The statement also highlighted difficulties caused by the emergency rule that the Turkish government extended for additional 90 days on Jan. 4.

“U.S. citizens have been deported and/or detained and held without access to lawyers or family members under the state of emergency. Delays or denial of consular access to U.S. citizens detained or arrested by security forces, some of whom also possess Turkish citizenship, have become more common,” the statement said in a warning to US citizens who are considering travel to Turkey.