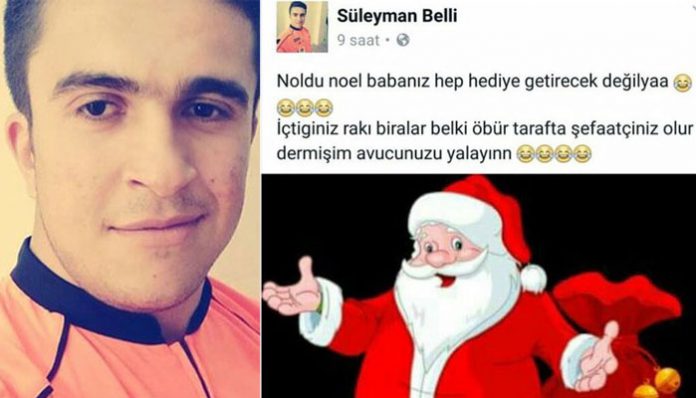 Süleyman Belli, a Turkish football referee from Kütahya province, was referred to the Turkish Football Federation’s (TFF) disciplinary committee after sharing a post on Facebook criticizing the victims killed in a terrorist attack in a nightclub early on Sunday.

In a statement on Sunday, the TFF said Belli’s post on Facebook humiliates the Turkish football community and ran counter to Turkey’s sports culture. “The behavior [of Belli] by sharing posts on social media is against the national, moral and sports culture that can result cancelation of his license and disciplinary action,” the TFF statement said.

In a Facebook post following the İstanbul nightclub attack that killed 39 people and wounded another 69 on Sunday, Belli wrote: “What happened? Santa can’t bring presents all the time. The alcohol and beer you drank can save you in the next life!.. You won’t get anything!”

At slightly after 1 a.m. on New Year’s Day, a man wielding a Kalashnikov rifle reportedly killed a policeman and a civilian outside the entrance to the popular Reina nightclub and blazed his way into the club, randomly shooting at some of the hundreds of revelers bringing in the new year.

Thirty-nine people died at the scene in total, while 69 were injured. Of the 25 male and 14 female victims of the slaughter, seven were Saudi Arabian, two Indian, one from Canada, one from Syria, one from Israel, two Tunisians, four Iraqis, one Lebanese and one from Belgium. Eleven were Turkish citizens.