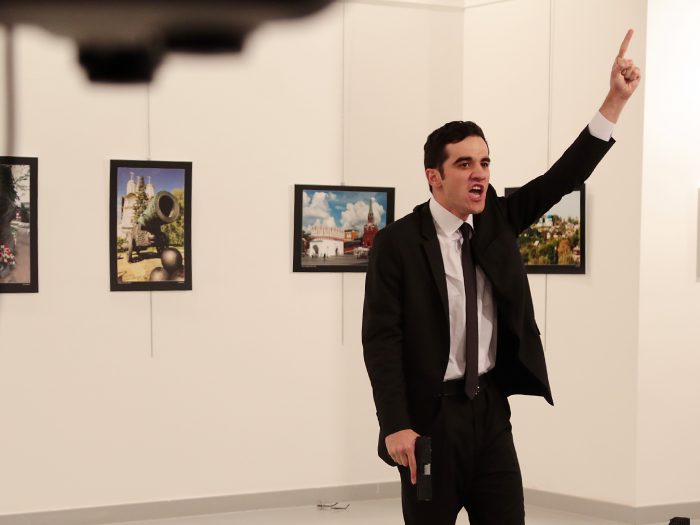 Following the assassination of Russian Ambassador to Ankara Andrei Karlov on Dec. 19 by a young Turkish police officer who chanted radical slogans, the Ministry of Interior Affairs has launched investigations into 55,000 police officers, part of a police force that has been shaken by massive purges over alleged links to the Gülen movement since December 2013.

Milliyet daily correspondent Tolga Şardan reported the story assuming as fact the government’s allegation that the police officer, Mert Altıntaş, was linked to the Gülen movement. Although the police officer’s family denies any affiliation with the movement and says Altıntaş was not the subject of any investigation into Gülen links despite Turkey’s massive purge against the movement, particularly within the police force, the pro-government media has been reporting the government’s narrative while neglecting clues of radicalization in the young police officer’s life.

In addition to investigations into 55,000 more police officers, Milliyet also reported that the security detail of President Recep Tayyip Erdoğan has been subject to a reshuffling since some police officers from among the gunman’s colleagues were appointed to protect Erdoğan.

Altıntaş was recruited to police ranks in 2014 through the Justice and Development Party (AKP) reference system, which was initiated by the government following a Dec. 17/25, 2013 corruption operation that implicated several ministers and President Erdoğan’s family.

In addition, the gunman Altıntaş was financially rewarded more than 30 times by the AKP in a two-and-a-half-year period as a police officer.

Turkey had issued a gag order on the investigation of the assassination of Russian envoy hours after the Hürriyet daily published an interview with the gunman’s sister. As opposed to Erdoğan’s claims connecting the gunman to the Gülen movement, his sister denied any links on his part to the movement and questioned how he had not been dismissed in massive purges over Gülen links.

She also referred to a close friend of the police officer who gunned down the Russian envoy and then chanted radical slogans protesting the involvement of Russia in Aleppo.

According to her account, her brother was extremely close to a man she called “S.” and said that even when on duty he was with this young man. This colleague S.B. and Altıntaş were also roommates until S.B. got married.

The police had detained Altıntaş’s latest roommate, a lawyer named Serkan Özkan. During the investigation into the gunman, the law office for which Özkan worked, the police shut down PGS. The partners at the PGS law office had shared photos with government officials including Minister of Interior Süleyman Soylu that have been circulated on the internet. Last week, Soylu claimed that the murderer was linked to the Gülen movement and that the radical Islamist clues in his life were efforts to disguise his links to the movement, which is known for its promotion of interfaith dialogue and is frowned upon by Islamists for those efforts.

It was also reported  that the gunman had attended the sermons of Nurettin Yıldız, a staunch supporter of President Erdoğan.

The Hürriyet daily reported that police officer Altıntaş, who shouted al Nusra Front slogans after shooting the Russian ambassador in an art gallery, attended the sermons of Yıldız at Ankara’s Hacı Bayram Mosque.