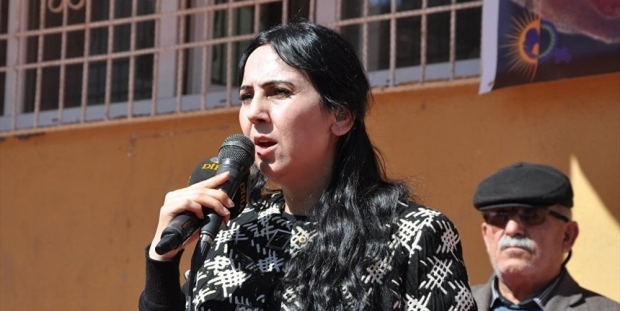 A government decision to remove elected Kurdish mayors in Turkey’s Southeast has sparked an uproar across the region as People’s Democratic Party (HDP) Co-chairperson Figen Yüksekdağ described the move as a coup against the will of the people, calling for mass protests against the decision.

Yüksekdağ went on Sunday to Suruç, a border town in the southeastern province of Şanlıurfa where the HDP mayor was removed, to deliver a speech to angry supporters. She was unable to enter the municipal office since the police had erected barriers outside.

“Those who inflicted a blow to the will of our people by laying siege to the bastions of democratic resistance and honor and who think they can remove the HDP and the Democratic Regions Party [DBP] as options and as hope are only seeing a dream,” she told a crowd gathered in front of the municipal office to vent their anger over the decision.

“They will wake up from this dream and will face reality once again.”

She also said that real “democracy watches” would begin there, in reference to nightly rallies held by supporters of President Recep Tayyip Erdoğan for nearly a month after a failed coup attempt on July 15 to display solidarity and support for Turkey’s elected government.

Critics then said the rallies quickly turned out to be partisan gatherings for the government and Erdoğan.

“We are not just a municipal building, were are the people. A coup took place today in 28 towns and provinces,” she said. “Those who say they conducted a coup against the state are now carrying out a coup against the nation. Today a coup is taking place against the Kurdish people.”

The move will likely complicate any effort to solve the Kurdish question, and many say it will benefit hard-liners and the Kurdistan Workers’ Party (PKK), which is fighting for autonomy in Turkey’s Southeast.

The PKK is listed as a terrorist organization by Turkey, the US and the EU. The US on Saturday expressed concern over the decision to remove the elected mayors.