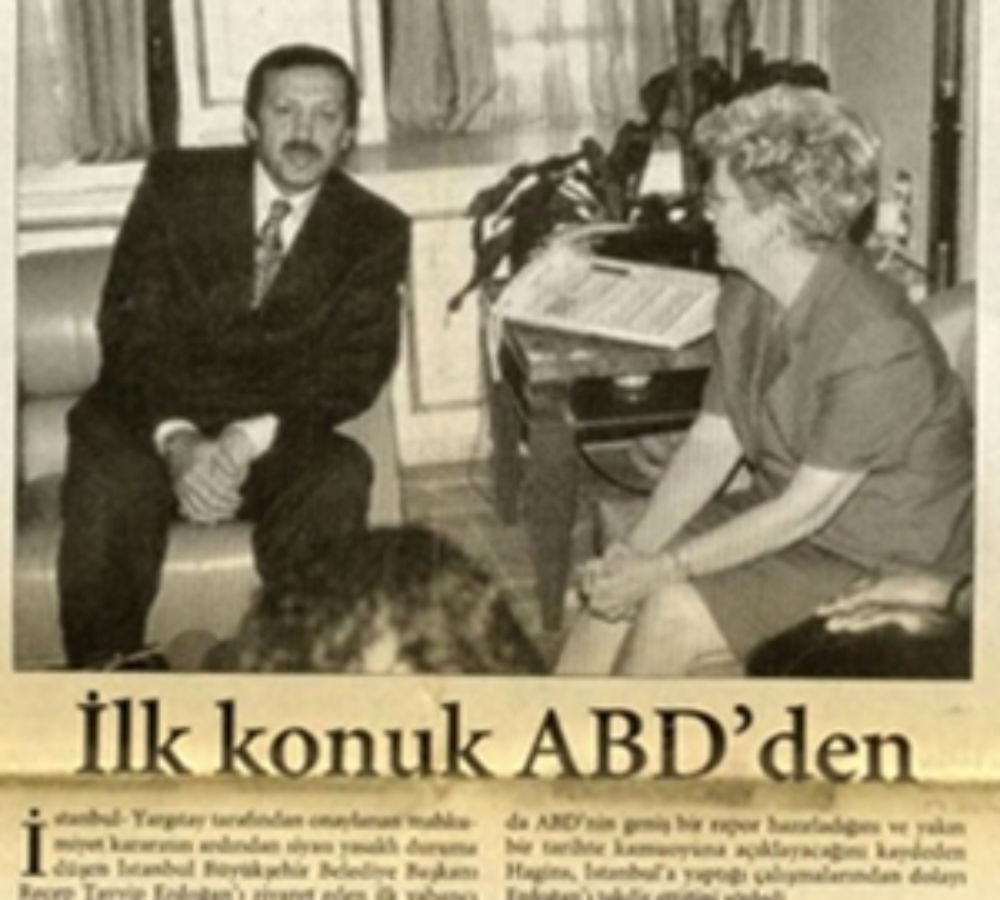 As President Recep Tayyip Erdoğan heavily criticized some Western envoys on Saturday who attended the trial of two journalists facing espionage charges, a photo dating back to 1998 came to light showing then US consul general in İstanbul paying a visit to Erdoğan to give her support after Erdoğan, who was the mayor of İstanbul at the time, was convicted in a trial.

Speaking at the World Turkish Entrepreneurs Assembly hosted by the World Turkish Business Council (DTİK) on Saturday Erdoğan blasted the foreign envoys who attended the first hearing in the trail of Cumhuriyet daily’s Editor-in-Chief, Can Dündar, and Ankara Bureau Chief, Erdem Gül.

“Yesterday [Friday] there was the hearing of a journalist. The Consul Generals in İstanbul were at the hearing. Who are you? What business do you have there?” Erdoğan asked.

Dündar and Gül, are currently facing trial on charges of “being members of a terror organization”, and “espionage” upon a personal complaint lodged by Erdoğan for reporting on trucks belonging to Turkish intelligence that where allegedly carrying weapons to radical groups in Syria.

“This is not your country” Erdoğan said, referring to the foreign envoys who attended the trial. “This is Turkey. You are allowed to move around the consulate building or the borders of the consulate, anything else is subject to permission. These [Consuls] are brazen enough to violate their limitations by making an appearance [at the courthouse].”

“Those who constantly speak of democracy, human rights, freedoms, are showing who they choose to side with when confronted with the choice of being with the elected [government] or those with a pro-coup mindset” he added.

Shortly after Erdoğan made this speech, a photo showing Erdoğan and then US Consul General in İstanbul Caroline Hagins on Sept. 29, 1998 began to circulate in the social media, with many social media users reminding the president that he also received support from a foreign envoy when he was convicted of charges of “inciting hatred based on religious differences” in a speech he made in Siirt province in 1997.

Hagins paid a visit to Erdoğan four days after his conviction was approved by the country’s Supreme Court of Appeals as a result of which he spent four months in jail from March 24,1999 to July 27, 1999.

The visit made its way to the newspaper pages with a headline saying, “First guest from the US.”

In the meantime, Prime Minister Ahmet Davutoğlu also criticized the foreign envoys on Saturday who attended the trial of journalists Dündar and Gül. Davutoğlu said the behavior of consul officers and diplomats in the court was wrong and inconsistent with professional conduct.

He also said the Turkish Foreign Ministry will take action against the diplomats who attended the two journalists’ trial on Friday.